November 04, 2019
Hello friends! Hello people monitoring this blog! I don't know if I should be flattered or freaked out or amused, but following my recent participation in an entirely legal, respectful political protest, I discovered that my usual blog page views had shot up to 676 in one day, largely coming from Russia. So hi, new friends. I'm glad that you found my blog, and hope you enjoy my poetry and fiction! If you are queer, I hope my writing gives you hope. If you're a bot, maybe I'll title my next book Troll Farm.
This incident reminds me of a fascinating conversation I had with my students a week ago about the loss of privacy in the age of the internet. We had a delightful, animated conversation that felt a little odd and scattered, until I realized we were all talking about different concepts of privacy. I was thinking about literal physical privacy. Being alone in a room. Studying in the library. Writing in a diary no one else would ever read. Sharing a photograph with one other person. My students, however, were all talking about privacy settings. About the difficulty or ease of choosing who sees what on shared devices or platforms. Their concept of privacy assumed an audience; for them, privacy meant starting with an audience, then filtering it out. For me, privacy meant being alone, or sharing something with just a few people. The concept of strangers was included in my students' idea of privacy. Strangers were always there; it was just a question of when to filter them out.
I don't move through the world with a great deal of nostalgia; I tend to focus on present day pleasures and problems. I'm not particularly sentimental. But I miss certain forms of privacy, including both solitude and the gift of choosing when to share time, words, and affection with one person. I'm not on Facebook because I don't trust the company's politics or surveillance tactics, so finding that my scruffy, old school blog had been visited by a team of bots was disheartening. I wish I could pretend all 676 page views were LGBTQ folks in Russia newly discovering my writing, but while I'm an optimist, I'm not a fool.
For you readers, an update: I'm writing feverishly, working on several collaborations at once, including a series of science fiction stories and a manuscript of prose poems. The urgent, joyful need to create is stronger than the fearful, destructive need to monitor, manipulate, and control. Maybe it's time to re-watch The Lives of Others. 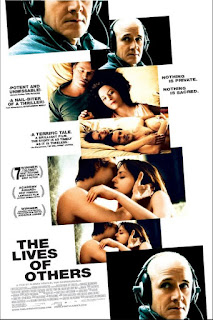